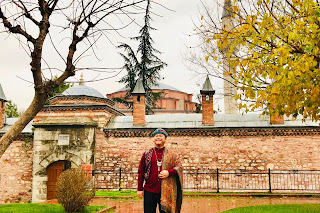 - What better way to start the new year than having an adventure! As they say, whatever you do on the new year will pave way to whatever you're doing for the whole year. Though I don't necessarily believe this fully, I do hope for more travels and adventures this 2020!

- I began my new year by visiting the 16th-century Sokullu Mehmed Pasha Mosque, which, although a small mosque in the hidden alleys near my hotel in the Fatih District, was made by the Ottoman Empire's grand architect, Mimar Sinan. I actually did not have any intention going inside this mosque; I was on my way to another mosque, but since the mosques looked alike, I went inside this one by mistake. It was a good mistake though, but it does say something about the rather homogenous appearance (from structure to, at times, color) of Ottoman-Islamic architecture.

- My intention was to visit a less-visited mosque hidden in a semi-residential area further away from the center, but is also an interesting place to visit if one has a bit of extra time. The Kucuk Ayasofya ("ku-chuk aya-sof-ya") or "Little Hagia Sophia" shares much with the actual/big Hagia Sophia at the city center apart from their appearance. It was built almost the same time as the big Hagia Sophia in the 6th century, and both started out as Byzantine churches before being converted into mosques during the Ottoman Empire.

- Later on we rode the tram from Sultanahmet station to Karakoy station, and once more rode the funicular up the hill to the Beyoglu District. I once again visited the Galata Mevlevi House Museum, but not to watch whirling dervishes again like what I did the day before (click here), but to learn more about the lives of the Sufi whirling dervishes.

- The Mevlevi House was built in the 1400s as a lodge for members of the Mevlevi Sufi Order, which originated in Konya by none other than Rumi himself (also known as "Mevlana;" click here to see my visit to his grave in Konya here). For me, this museum had more extensive exhibitions compared to the museum in Konya. The main difference is that in Konya, the living quarters and Rumi's grave (of course) were the focus, while the Mevlevi House highlights the things used by the dervishes (pens, books, documents, and musical instruments.)

- After visiting the Mevlevi House, we walked around Istiklal Street for a bit before finding a restaurant to have lunch. The most interesting restaurants for me are those that look like cafeterias, where you just point to a dish you like and they'll serve it for you. (In Filipino, "turo-turo.") The food there seem less touristy and more varied than eating in a regular restaurant - the price is also more reasonable, I think.

- Finally, I decided to have a last visit to the Grand Bazaar, near Beyazit tram stop, for a last shopping trip. To be honest I really didn't get to buy much since most of the stores sold the same things (we Southeast-Asians like to call it "same same but different.") Still, it was nice to see the bazaar in its maze-like glory. The pastel-like hues of its antiques, carpets, jewelry, costumes, fabric, and shoes are definitely a feast for the eyes of the creative mind.

- Alas, our trip to Turkey had to come to an end that night, as we went off to Ataturk International Airport to catch our flight back to Manila. The only thing I can say is that this trip was good enough to give me an idea of how wonderful Turkey is as a country, but because of certain missed opportunities such as not being able to ride the hot air balloon in Cappadocia, or not getting the chance to see other places due to lack of time, I definitely wish to see Turkey again in the future to see and learn more about this country between continents!!

- Don't forget to read about my other adventures in Turkey:

Part 3, Laodicea on the Lycus and the Alien Travertines: here 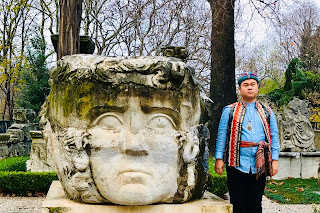 - The year 2019 was about to end, but still I was not done exploring the wonders of Istanbul! There was really much to see in Istanbul, considering I only had time to visit around two of its many districts. (What more if I spent a full week or more in Istanbul, right?)

- That morning I went back to the Topkapi Palace grounds to visit the Istanbul Archaeological Museums (closest tram station: Sultanahmet stop.) It is located in the first courtyard, just after the first security check. Do note that the way to the museums from the courtyard involves a rather steep sloped path. The Archaeological Museums is actually made up of three smaller museums (your entrance ticket is automatically an entrance to all three): the main Archaeological Museum, the Museum of the Ancient Orient, and the Tiled Kiosk that functions as the Museum of Islamic Art. The museums were built in the 1800s as a way to modernize Turkey based on what its Ottoman rulers saw in Europe.

- One part that immediately caught my attention was the courtyard that sort of acted as an open-air museum with all its ancient sculptures exhibited out in the open air. I really wonder if they won't be damaged from constant exposure to the forces of nature.

- The Museum of the Ancient Orient holds pieces that come from civilizations from Mesopotamia up until the Anatolian Plateau. The museum is closest to the ticket booth, and in my opinion it is best to start your visit of the three museums with this particular museum. It gives an idea of the historical and cultural beginnings and developments of the region.

- I soon visited the Museum of Islamic Art (Tiled Kiosk,) though ideally this should be visited last as it shows the most recent forms of historical art (Ottoman era from medieval and imperial Turkey.) It reminded me of all the kiosks and halls that I saw inside the Topkapi Palace.

- Finally, I visit the largest of them all, the main Archaeological Museum. Although part of it was being renovated, its diverse and uniquely-themed artifacts (ex. one section was dedicated to sarcophagi) made me want to discover more about ancient Turkey.

- After visiting the museum, we rode the tram to Eminonu for a short visit to the Spice Bazaar as I wanted to buy more things, before riding the tram again to Karakoy for lunch (Karakoy tram stop.) After taking some photos of the view from Galata Bridge, we looked for the funicular to take us up the hill.

- The funicular called "Tunel" ("tyu-nel") is just across the street from the Karakoy tram stop, and also uses the Istanbulkart (Istanbul metro card.) The funicular was built in 1875, and since then has brought the residents of Istanbul up and down the hill.

- Once uphill in the district of Beyoglu ("be-yo-lu",) we walked around to see the shops on the way to see the Galata Tower. Originally built in the 1300s by the Genoese to replace an older tower built by the Byzantines, the Galata Tower was meant to be an observation tower and defense tower.

- Later on I decided to watch a Sufi sema ritual at the Mevlevi House, near the funicular station; the ticket to the show was worth 100 Lira. A sema ritual/performance is done everyday at around 5pm (but do check the schedules as they can change at times,) and is best to arrive around 30-45 minutes - earlier if possible - since there are no seat reservations. 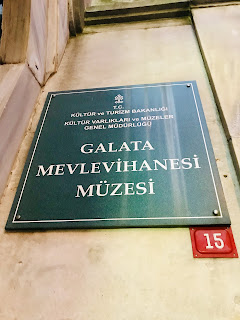 - The sema ritual is a religious ceremony that the whirling dervishes are known for. To untrained eyes, the sema ritual seems like a whirling dance performance, and while on one hand it does appear that way, on the other hand, it should be understood that the sema ritual is a form of prayer. The ritual involves chanting of Islamic verses while being accompanied by traditional instruments such as flutes, lutes, and drums, while the dervishes salute each other before whirling. The position of the hands are also noticeable: the right hand faces upward to receive blessings from Allah, and the left hand faces downward to share these blessings.

- During the whole ritual, everyone was silent, and the only sounds to be heard are the singer's voice and the musical instruments. Although I did not understand everything that was going on apart from my basic understanding of the sema ritual (and the fact that I am not Muslim at all,) I felt that watching the dervishes whirl was quite therapeutic and I felt that I was receiving blessings as well from a divine being. Sometimes, I feel that the act of prayer can break religious boundaries. Since it was the end of the year, I guess it was what I perfectly needed: blessings of peace, love, and happiness.

- After the one-hour sema ritual, I walked the entirety of Istiklal Street, one of Istanbul's main shopping streets (think of New York's 5th Avenue, Korea's Myeongdong, or Singapore's Orchard Road.) I underestimated the length of the whole street, especially since I told my family that I'd be meeting them at the end of Istiklal Street (I left them alone to shop while I watched the sema ritual since they were not interested in watching whirling dervishes.) The street was becoming a lot more crowded, with police checkpoints every few blocks, as Istiklal Street would be converted to a party street for the New Year countdown. Taksim Square, where I asked my family to meet me, was also barricaded. Taksim Square, by the way, is a public square with a monument built in 1928 to celebrate the 5th anniversary of the establishment of the Republic of Turkey.

- That evening, I roamed around Sultanahmet to take pictures of the Hagia Sophia and the Blue Mosquare at night. I also bought a cone of lemon-flavored Turkish ice cream (since why not while you're in Turkey.) The ice cream man did not do his antics though, I was a bit sad, but hey at least I got my cone in a second; Turkish ice cream vendors are known for their ice cream stunts, which comes off as playing tricks with their customers (pretending to give you your ice cream cone, turning your ice cream upside down, etc.)  I walked back to my hotel like a happy little fat boy with his ice cream.

- As the new year was approaching, I went to our hotel's rooftop to see the fireworks from afar. As the clock struck twelve, I remembered that it was my second time welcoming the New Year in Istanbul - I also did last year, at the airport, since Istanbul was my layover from Austria on my way back to Manila.

- I went back to my room after watching the fireworks out in the cold; the fireworks display was much shorter than I had expected. As much as I wanted to be sentimental and have a mental flashback of things that happened to me in the past year, or perhaps write a long essay and post it on Facebook or Instagram like other people (as if everyone was part of an essay writing competition,) I still had to pack my things and prepare myself for my last full day in Turkey!

- Don't forget to read about my other adventures in Turkey:

Part 3, Laodicea on the Lycus and the Alien Travertines: here

gilbert_que
Welcome to Itchy Toes Adventures!! I am Gilbert Que, and I am everywhere! Some of my friends call me Gibby, and I think that's a cute name. I like to travel, eat, learn languages (I speak a lot,) and meet people. I am passionate about cultures; I collect traditional and indigenous clothes and accessories from around the world. I am an academic, specializing in Asian Studies (particularly India,) communication, and sociolinguistics. I am also a performer, and the world is my stage.

The Journey So Far