- Not long after the Philippine-food cooking demo class (click here), my food-blogger friend Clarisse (aka "The Tummy Train," click here for her food blog) was invited yet again to another food-and-media event. This time, the Turkish Flour Yeast & Ingredients (TFYI) Promotion Group, in cooperation with the Filipino-Chinese Bakery Association Inc. (FCBAI), organized a one-afternoon Turkish-bread-making course. Since she was allowed to bring a guest, I go to tag along again. I was more ecstatic than the usual, since I'm quite into Turkish culture lately, as I've been watching a prominent Turkish period series called "Muhteşem Yüzyıl" or "Magnificent Century." (This awesome series is about the life and family of Suleyman the Great.)

- Clarisse and I arrived quite early at FCBAI, which is located near the Tayuman LRT Station. Pastry Chef Emin Aydenir had started doing some of the pastries while waiting for the other media people to arrive. Since we were too early, Clarisse and I, together with some others who got there early, had the opportunity of  helping the chef with the pastries hands-on. I was never good with anything dough-related, so I only had the simple task of coating the pogacha with sesame seeds. Pogacha (read as "poacha") is a typical Balkan, Hungarian, and Turkish bread that can have various fillings inside like cheese, potatoes, or olives.

- Chef Emin was an amusing chef. We could see that he's used to being with people, as he always allotted time for picture taking, or posed when he knew his photo was being taken. I also go to practice the little Turkish I knew with the chef, as well as with Mr. Turgey Unlu, president of  TFYI, and Dr. Hamit Koksel, professor of food engineering from Hacettepe University. 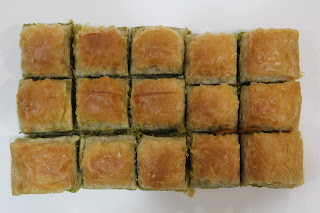 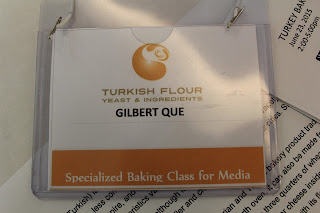 - When the event formally started, FCBAI former president Mr. Henry Ah gave the opening remarks, before giving the floor to Dr. Koksel, who gave us an introduction to Turkish breads and food technology. He told us that wheat has been cultivated in Turkey since around 8000 years ago; ancient Anatolia is probably one of the first (if not the first) to domesticate wheat, and use it to make bread. Today, Turkey is the second biggest exporter of wheat, and that Turkish flour made from that wheat is of the finest quality. Turkish flour is exported to many parts of the world, from Europe to Asia, and can be used perfectly to produce a wide variety of bread (ex naan and chapati) and bread-related products (ex. pizza.) 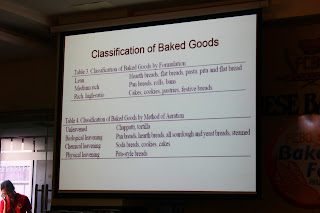 - After Dr. Koksel's short lecture, Chef Emin first taught us how to make gozleme, which is like the Philippines' own empanada. Balls of dough were prepared for us, and all we had to do was flatten them out into thin circles, and combine ingredients such as mashed potatoes, mushroom slices, chopped spinach, shredded cheese, or even Choco Loc (aka Turkish Nutella.) After placing the filling, on one half of the circle, the other empty half was used to cover the other filled half. The crescent-shaped pie should be flat, so the ingredients inside will be cooked evenly when pan-fried.

- The other types of bread seemed to take longer to bake, so Chef Emin only demonstrated how to do them, while asking minimal help from volunteers while the bread he prepared when Clarisse and I arrived were being baked. I, on the other hand, spent more time making more gozlemes, and eating them as well (sorry not sorry, they were bursting with flavor.)

- Later on, tray after tray of bread came out of the kitchen with grand aromas. I am a sucker for the scent of freshly-baked bread. While leaving them to cool down, we were asked to watch a short video on baklava-making in Turkey; we could not make them since is was not feasible. Apparently, this celebrated sweet layered pastry from Turkey and Greece is only made by a couple of "baklava masters." The Turkish variant of baklava is a lot syrup-y, with a lot more pistachios, while the Greek variant is drier and nuttier, and less sweet. We all got to try a piece of baklava, and because I said I loved the baklava in Turkish, I got to have an extra piece (the little perks of speaking to the heart than the mind.) 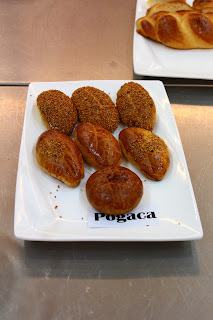 - The best part of the afternoon was being able to grab as much bread as we wanted to take home. Since there was a lot of bread for everyone, I took one of each kind. In the end, we all got official certificates from the organizers. And more goodie bags. My heart literally jumped when I opened the two big packages after coming home - one was a box of Turkish baklava from one of the best baklava-makers in Turkey (Karaköy Güllüoğlu), and the other box, some fine glassware from Turkey.

- I enjoyed this event a lot (did I mention it was free) since I got to get my hands "dirty" (other events usually only had us watch the chef cook,) receive awesome freebies from the organizers, learn more about Turkey, practice my Turkish, eat to my heart's content (had to skip dinner since I ate a lot,) and finally, get precious gifts from the organizers. These made the baking course one of the best food-related events I've been to (or have tagged along to, again with thanks to my good friend Clarisse.) Turkey is a magnificent country, and my experiences in this jam-packed afternoon made me want to go to Turkey all the more!!
Posted by gilbert_que at 11:30 PM

gilbert_que
Welcome to Itchy Toes Adventures!! I am Gilbert Que, and I am everywhere! Some of my friends call me Gibby, and I think that's a cute name. I like to travel, eat, learn languages (I speak a lot,) and meet people. I am passionate about cultures; I collect traditional and indigenous clothes and accessories from around the world. I am an academic, specializing in Asian Studies (particularly India,) communication, and sociolinguistics. I am also a performer, and the world is my stage.

The Journey So Far